Nestled next to the rolling farmlands in Harris Township between Route 45 and Pine Grove Mills, sets John Hess Softball Complex (link to map). The complex was initially established in 1963, by local softball enthusiast John Hess.

In September 2009, Harris Township officials proposed that the COG acquire, update, and operate the complex. The site was owned by the Hess Family Estate and leased to Mr. Galen E. Dreibelbis for use by the State College Area Softball Assn. (SCASA).  Mr. Dreibelbis, working with the SCASA, was also instrumental in providing most of the facilities on the site. Given that the four fields have typically hosted hundreds of games each year, including many weekend tournaments, and that the Hess family wished to sell the property, the COG Regional Park Planning Committee began to evaluate the proposal in detail. These facilities play an important role in providing softball opportunities to residents, as well as providing value to local tourism with the tournaments.

In 2009, the COG General Forum engaged Pashek Associates to conduct a safety evaluation of the complex. The report identified the specific improvements necessary (if acquired) for visitor and player safety and to provide ADA access. The recommendations outlined in the report involved immediate, short-term and long-term improvements.  In September, 2010, COG officially assumed ownership of the complex, and the Master Planning process started. From September to May, 2011, updates to the complex were completed that included backstop replacements, fence repairs, ADA access, new bleachers, and infield and turf renovations.

Today, the complex continues to be home to various recreational activities, local softball leagues, as well as local and regional softball tournaments for both youth and adults.

Through the Master Planning Process, continued development of this complex was identified for Phase II, which will include a re-orientation of the fields, a restroom building, and concession stand. The are currently two reorientation options for the fields at this complex; orientation #1 calls for three fields and orientation #2 calls for four fields.  If you would like to donate toward the Phase II development of Hess Softball Field Complex, your contribution is welcome, no matter the amount. You may contact the Agency via email for more information about donations.  At this time, there are no municipal or parks and recreation funds earmarked for the Phase II development of this park.  Your help is greatly appreciated so that we can see this park through to its full development! 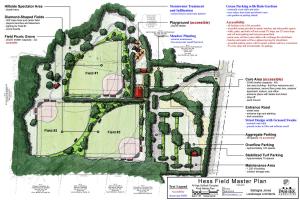 Hours of Operation:
Parks Maintenance Staff work various schedules throughout the year, but in the full season, CRPR has staff working seven days a week.